This week, developers responding to the demand for multifamily and affordable housing from Connecticut and around the northeast met with municipal officials seeking to diversify the housing choices in their towns at the second installment of Multifamily Speed Dating . Early returns from the session - hosted by the Partnership for Strong Communities and the Connecticut Chapter of the American Planning Association - were passionate:

“This is great for small towns!”

“I have a dozen of towns I have to follow up with!”

“Even better than the last time!”

The time was right for another Multifamily Speed Dating event. Connecticut is undergoing profound demographic shifts. Ours is a state of relatively high median household incomes and high housing costs, with a limited range of housing choices for municipal workforces, Baby Boomers seeking to downsize with minimal savings, Millennials entering the market saddled by education debt, and working families struggling under stagnant wages.

Realizing this unmet need, over 40% of towns across the state have taken part in the Department of Housing’s Incentive Housing Zone Program. Dozens have revised their zoning to encourage density and multifamily housing. Hundreds of mixed-income apartments are being developed.

Town planning staff often has limited time and resources to connect with the broader development community and the news of so many municipalities interested in developing multifamily housing options needed to be amplified.

Before the sounding of the bell, the audience heard presentations from two state agencies. Deputy Commissioner of the Department of Housing, Nick Lundgren, described the many programs available to support development, both competitive (such as CHAMP and Low income Housing Tax Credits) and those available on a rolling basis (including the Just-in-Time and Pre-development Loan Programs).

Undersecretary Garrett Eucalitto of the Office of Policy and Management highlighted the nexus between housing and transit and economic development. Undersecretary Eucalitto identified the role of additional agencies in advancing affordable and mixed-income housing development, including brownfield remediation and historic tax credit resources from the Department of Economic and Community Development, Urban Act and Small Town Economic Assistance Grants, and the LISC transit-oriented development pre-development fund. 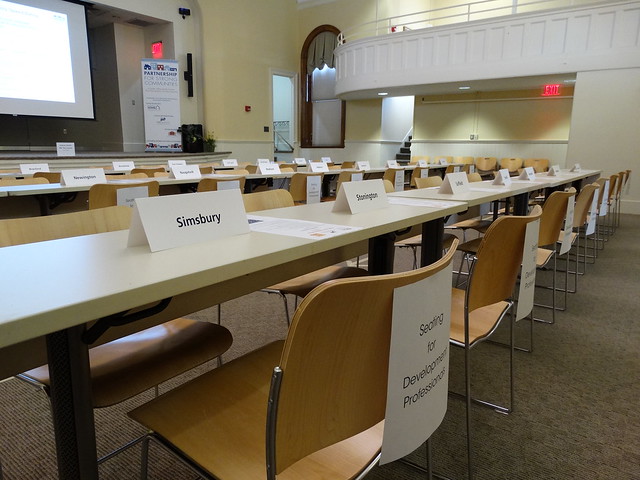 Both speakers encouraged interested towns and developers to contact them to discuss ideas and projects. And with that, the speed dating began. Development professionals sat across from municipal representatives for 90 seconds, sharing information about what each has to offer the other. As the ringing of the bell guided participants along the rows of municipalities, it was clear that the event would to lead to many ‘second’ dates!

Materials from the event: