This year’s IForum series kicked off with a bang – setting records for maxing capacity and attendance. The changing housing needs across Connecticut have often gone unmet because of local zoning barriers and the failure to realize that the new housing market requires new solutions, state and local experts told the record Lyceum crowd Jan. 30. The topic of zoning and the intersection with housing affordability and Connecticut’s future attracted lawmakers, state agencies, advocates, philanthropy and academics as well as planners and Planning & Zoning Commissioners. 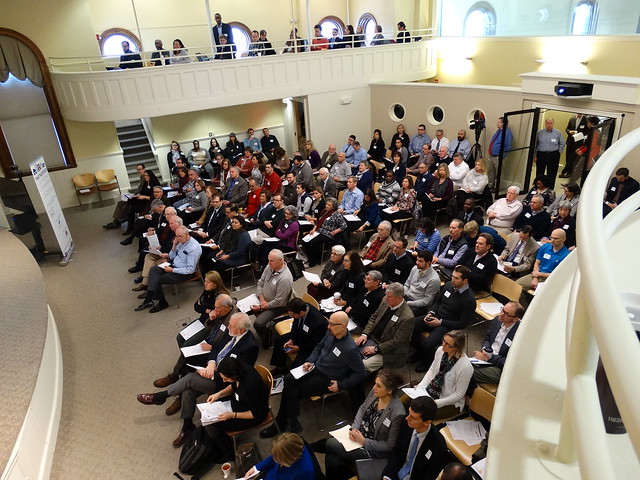 Lieutenant Governor Nancy Wyman opened with the need for communities to work together to improve access to housing for all residents. Connecticut Department of Housing Commissioner Evonne Klein highlighted the unprecedented affordable housing production rate of the Malloy administration, creating 20,000 units in the last six years. She noted the challenges posed by the thicket local zoning codes and highlighted the opportunities to remove local development barriers.

That two in five households in Connecticut struggle to make ends meet brought into sharp relief the burdens that housing costs have on 38% of residents, according to Rick Porth, President and CEO of the United Way of Connecticut. Even more poignant, at least 20% of households are ALICE households in 144 of the state’s 169 municipalities, illustrating that housing affordability was a challenge for every town and city in the state. Porth challenged the audience to follow the state’s good lead and to prioritize the creation of more housing options in attendees’ home towns in order to invite and safeguard the next generation.

The first panel, underscoring the history of zoning and its implementation, included Anika Singh Lemar, Clinical Associate Professor of the Yale Law School Community and Economic Development Clinic, land-use attorney Mark Branse, and Hiram Peck, Director of Community and Economic Development in Avon. Local municipal incongruities were highlighted that made developing affordable housing choices onerous and infeasible. Remarking on the changed housing market, Branse aptly surmised, “we’re zoning for a population that doesn’t exist and won’t exist into the future.”

To demonstrate the opportunities to leverage zoning for municipal economic growth, Old Saybrook First Selectman Carl Fortuna described the changes in the local housing market since the town was first zoned 50 years ago. From capes and ranches, to condominiums and subdivision, the town has adapted to evolving housing preferences without compromising local town character. So too, Fortuna observed, will providing more housing options at a variety of income levels. In order to attract restaurant and retail downtown, Old Saybrook is developing in-demand, transit oriented and affordable units, so as to avoid a main street devoid of character.

A second panel, moderated by planner John Guszkowski, hosted elected and appointed resident Planning & Zoning Commissioners Kevin Grindle of Hampton and Christine Goupil of Clinton to share their on-the-ground perspectives to the challenges of bringing residents along on the need to diversify their towns’ housing stock. “The Commission meets once a month, but my front porch is open seven days a week,” remarked Grindle, shedding light on the deeply local approach often needed to advance the conversation.

The audience, filled with personal experience and inquiry, closed with resounding hope to encourage improved visioning and planning of their towns, instead of the all too common “all z[oning] and no p[lanning].”